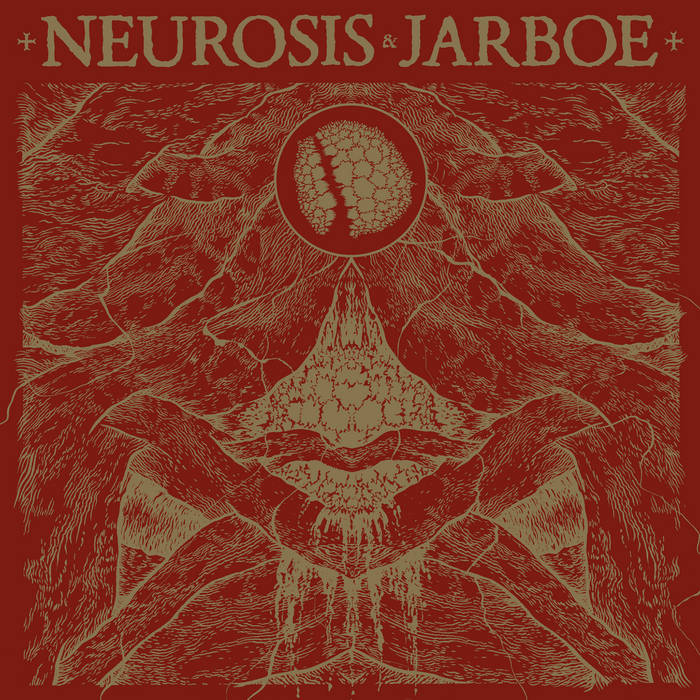 bcb723 It's scary. Each time I hear this album one of two things usually happens afterward: I go on a Neurosis binge or I go on a Swans binge. It's the perfect gateway drug into both of their worlds. Jarboe's performance is terrifyingly intense and pushes Neurosis into new areas of experimentation. It's just so gracefully good. Those that know, know. You know? Greatest moment... "I'll destroy you!" Hell yes you will. Favorite track: Taker.

Thomas Montinari I listened to this album right after discovering Times of Grace... amazing Favorite track: His Last Words.
more...

Neurot Recordings are proud to reissue the landmark collaboration Neurosis & Jarboe, which was originally released in 2003, incoming on 2nd August. This latest version is fully remastered and with entirely new artwork from Aaron Turner, available on vinyl for the first time, as well as CD and digital formats.

Steve Von Till explains the idea behind the remastering; "Bob Weston (Chicago Mastering Service, and member of Shellac) worked closely with Noah on making these new versions sound as good as the possibly can. Noah has the most trained critical ear for fidelity out of all of us being an engineer himself. We recorded this ourselves with consumer level Pro Tools back then, in order to be able to experiment at home in getting different sounds and writing spontaneously. The technology has come a long way since then and we thought we could run it through better digital to analog conversion and trusted Bob Weston to be able to bring out the best in it....This new mastered version is a bit more open, with a better stereo image, and better final eq treatment."

He continues about the original artwork..."Aaron felt he could create something that would unify the energy of both Jarboe and Neurosis in an elegant manner. We let him do his thing and I think it definitely adds to the mystery of the album and sets it apart from the rest of our catalog."

When two independent and distinct spheres overlap, the resulting ellipse tends to emphasise the most striking and powerful characteristics of each body. Such is the case with this particular collaboration between heavy music pioneers Neurosis and the multi-faceted performer Jarboe (who performed in Swans and who has collaborated with an array of people from Blixa Bargeld, J.G. Thirlwell, Attila Csihar, Bill Laswell, Merzbow, Justin K. Broadrick, Helen Money, Father Murphy, the list goes on...) The musicians pull from one another some of the most harrowing and unusual sounds ever heard from either artist at the time - a sentiment which also rings true to some 15 years later.

Neurosis & Jarboe opens with a high-pitched whirring sound winding up as Jason Roeder's ominous tom-drum beat and Noah Landis' slinking synth line writhe in unison until Jarboe drops in, drawing in her characteristic, corrupted Southern belle voice, "I tell ya, if God wants to take me, He will." From there on in, the album is a series of abrupt shifts and cleverly juxtaposed themes that flows in a rhythm of its own. The sinister and ethereal sounds, vocal coos and electro-pulses of "His Last Words" seem like the perfect soundtrack to a David Lynch film. On "Erase," song parts are dissected and grafted one atop the other, continually building tension as Jarboe wails and yelps with Banshee fervor. The project began with the artists working in seclusion, recording the elements that would best highlight their own characteristic integrity and personality, rather than either attempting to mimic one another's familiar elements. As recorded ideas were passed back and forth, the collaboration proved to bring out the most unhinged and urgent talents of all those involved. Throughout the album, that signature "Neurosis note" - the sound of something simultaneously recoiling and erupting, the apocalyptic tone announcing the birth of a new world - reaches its apex and becomes evermore icy and eviscerating. Guitarists Steve Von Till and Scott Kelly trim their tones for cleaner, chorus-drenched effects layered between the thunderous distortion blasts of bassist Dave Edwardson. Likewise, Jarboe's operatic wail and other vocal contortions sound perfectly suited to the eruptive emotional fray of the music.

The collaboration is a deeply textured mosaic that is a culmination of merged aesthetics from two major influences on free-thinking sounds. It unlocked the hidden potential of electronic music as a new force in heavy rock. At a time when groups like Oneida, Wolf Eyes and Black Dice were beginning to experiment with technology in making mind-numbing leaden electro-drone freed from any essence of "dance music," Neurosis & Jarboe redefined all notions of their past - and outlined the course of heavy music to come. It's interesting to look back through the lens of this release, and think about these ideas and concepts in the present.

Neurosis & Jarboe remains the meeting point of all art that takes us beyond ourselves.